We have a date!! Sorry for the lack of posting but we've been busy packing! Settlement is booked for Thursday 4th July and the removalist is coming on Friday the 5th. I can't wait to be in our new house! Rhys had to talk me out of sleeping there Thursday night in a sleeping bag haha. The only thing that made me change my mind was the fact that the removalists will be here at 9am and it's a 1 1/2 hour drive.

So tomorrow after work we're staying at our friend's place down there, meeting SS on site at 9:30 to go through the house, and then if all is well we head back to Port Melbourne to pick up the keys. Why we have to go all the way back to Melbourne again I'll never understand, but apparently PD won't do it any other way so that's that! If everything finishes up early enough we wanted to take a ute load of boxes down Thursday just to get a bit of a head start and then we'll head back up to Melbourne for dinner with close friends to celebrate our last night as Melbournians.

So we had PCI on Tuesday 18 June. All went very well. Our independent inspector met us on site and went through the outside and roof while we went through the interior with our SS. Overall Porter Davis have done a really great job! The only things to fix up from PCI were:


Looks like a decent list but really for a whole house it's not too bad! And most of those things are pretty minor. As far as building standards go our inspector was very impressed. He's going to come back out after handover and do another inspection since most of the things he'd noted on PCI day were already on our SS's list, so he'll come back to make sure those things got done and nothing further needs to be addressed when 3 month inspection rolls around.

We got the Certificate of Occupancy on Friday and I faxed that off to the bank with everything else, so now it's just a matter of the bank getting someone out to do their final valuation and then organising a cheque, and we're good to go! We should be looking at around the 4th July (Independence Day!).

Light at the end of the tunnel

PCI is booked for Tuesday!! Rhys and I went down and had a look around yesterday, lots of blue tape where our SS has been around pointing out defects already!

To be honest I really don't know what to expect, but our independent inspector is meeting us there early to go over things so that should help.

Any advice much appreciated! Anything we should bring, other than our contract/plans?

Fingers crossed all goes smoothly!
Posted by Courtnee at 00:39 No comments:

The beautiful floors, plus splashback, tiles and carpet.


Ah, the floors I argued so long and hard with Rhys over are in and they look magnificent! Well, they look a bit dirty actually, but once cleaned up they will look magnificent! Again, all pics taken through windows because of lock up so sorry for any reflections/crappy quality. (Update 5/6/13 - Some indoor photos taken and uploaded now) 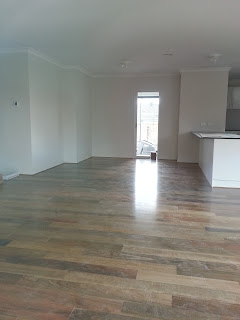 UPDATE 5/06/13: Now the tiler has come and fixed what was wrong we got a couple of pictures as he was working away

The feature tiles, checked to make sure they were right this time:

Rhys and I went down to check out the house yesterday. We'd been told the tiles and painting were all finished so I was pretty excited to see the tiles all put together. The house was locked up but we could see a fair bit through the windows. I had a look through the windows of the bathroom and all I could say was "Uh... well that's wrong!" The white wall tiles were supposed to be laid "subway" or "brick bond" style (see our tiles post for reference) but they were just sitting there, all grid like and boring and normal! And then our beautiful feature tiles were not our feature tiles at all, they were a brown stone pattern! BROWN?! How the hell did they get it that far wrong?! I'm thinking they must have just read the wrong item number for the feature tiles, they're not even close! Also some of the power points were mixed up. I'll post some photos below and show you what I mean. Sorry for the crappy quality, all taken through windows I'm afraid!


To make matters worse, our Site Supervisor is away on leave for the next 3 weeks, so we've emailed our Building Coordinator with these concerns and asked her to pass them on to whoever is looking after our site while SS is away. Hopefully they can sort it out soon! I'm thinking that since the wet areas are otherwise almost finished, if they're smart about managing their trades it shouldn't hold us back too much. We'll see though!
Posted by Rhys at 18:45 2 comments:

We went down to have a look at the house last weekend and met with our SS to go over the progress so far and where to from here. When we arrived the painters were prepping and he told us they should be finished by this weekend.

Fixing stage is officially complete, all cabinets are in, the benchtop in the laundry is in. Our sinks for the bathrooms and kitchen got taken by the stone cutters for our benchtops. Can't wait to see the benchtops in, should be another week apparently.

The progress will seem like it's slowing down now because from here on out all of the jobs will seem very behind the scenes, but the SS assures us we're moving along at a great pace and once tiles are done he can give us a move in date. At this stage we're still looking at June but no idea whether that will be early, mid or late June. Can't wait to find out!

Some photos from last weekend:

The house is moving along much faster than we had expected! So far no significant complaints, no hold ups, excellent communication from both our Building Coordinator and Site Supervisor. Could not be happier! At this rate we're hoping handover might be some time in June, but it's hard to say, anything could happen between now and then so we're not counting our chickens before they've hatched!

We got the email this week to let us know that fixing stage is complete so we arranged a meeting with our SS for Friday afternoon so we can have a walk through and point out any issues we have at this stage. Can't wait to see how it's all going! Last time we went through was two weeks ago when lock up had just been completed. Here are some photos from that day. Hopefully I can report back this weekend with some exciting new progress photos from fixing! 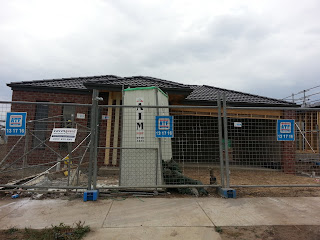 The usual photo from out the front.Wonder if SS would mind moving that portaloo off to the side? ;)

Posted by Courtnee at 04:37 No comments: