Once we had signed up officially, paid all of our deposits, chosen our block* and had a glass of champagne, the first appointment we had as far as personalising the house was our tile selection appointment with National Tiles.

*A note on choosing our block: We had actually signed up and done all of the drawings based on a block in Stage 8 of our estate. By the time we got over to the land sales office to pay our deposit the block had been sold (no less than half an hour earlier) to another builder. Needless to say Porter Davis were not happy with the mix-up! The only other block that suited our house design was one that land sales had not yet allocated to a builder, but as we had been stuffed around a bit they told us it was ours if we wanted it. The block is across the road from the running track with no house in front of it, true north facing alfresco, and slightly bigger than the original block - Heck yes we wanted it!! The only downside was that it was Stage 9 which is why we're still waiting for titles until December, despite having signed up back in May. Had our original block not been sold we'd be in the early stages of the build by now! So there you go, that's the story of how we ended up being one of the first people to build a house in Stage 9.

Back to the tile appointment.

I had done hours of research and gathered many many inspiration pictures. Thank God for Pinterest is all I can say! The main picture we ended up going with for inspiration was this one: 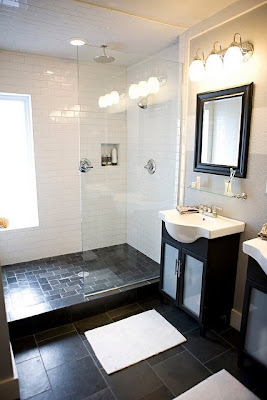 We wanted something fairly neutral but modern, something we could add our own colours to through towels, vases etc that would work well for the people living there after us. I liked the large black tiles contrasted with the smaller white subway tiles on the wall, also the difference in textures between the black matt and glossy white. However once we were in our tile appointment and had chosen the basic black and whites and the trimming, I was feeling very under-whelmed. We were trying to stick to a budget so I couldn't do anything crazy, but I thought it would be good to add something that would make it just a little bit different to any other stock standard bathroom, so we chose a beautiful feature tile which will go between the sink and the mirror in the bathroom and ensuite. I'm so glad we did that, it's one of the things I'm now most looking forward to about the house! Here are some pictures of our tile selections: 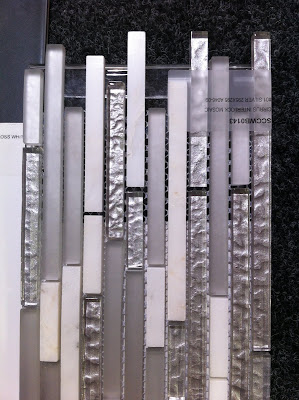 All of the tiles together: 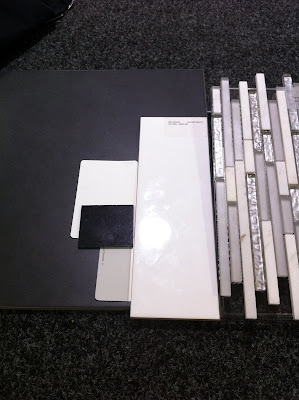 The larger photo also shows our wall colour throughout the house (Flokati by Wattyl), our caesarstone benchtop sample and the whites of our cabinets. The grey wall colour looks a lot darker in this picture than it does in real life. We chose it based on the Montague display home in Taylor's Hill because it's actually a very subtle grey. We're thinking we might do a feature wall in the master bedroom after we move in but that's something we'll decide once we've been living there a while and see how we feel.

The large black floor tile will also be used down the hallway and in the laundry. The white subway tiles will be on the laundry wall as well but without the feature strip.

So there we go, tile selections done! Feel free to ask me any questions regarding pricing or anything, but unless someone is specifically interested I'm not going to dig up those receipts. They're hidden somewhere within that great big folder (if you're building as well, you know what I mean!).